South Africa’s longest multi-day race is planting new mountain bikers along its 900-kilometre route thanks to a seed investment of 20 off-road bicycles from Kona South Africa.

The bicycles will form the basis of a sustainable development initiative by the nine-day Fairbairn Capital/Old Mutual joBerg2c, the second edition of which finished earlier this month.

Through the Kona junior mountain biking programme, organisers aim to grow a passion for riding in the rural communities that span the route from Heidelberg in Gauteng to Scottburgh on the KwaZulu-Natal coast.

“We want people to understand that mountain biking is not only a practical mode of transport but also a fun sport,” said The Bicycle Company’s Scott Fraser, who arranged the sponsorship.

Fraser said they also hoped to encourage the building of new mountain biking trails in these areas, which in turn would promote tourism and stimulate the local economies.

“We want to help people see the beauty of South Africa. By getting youngsters on the trails on a regular basis, they become sustainable.”

When Fraser, who rode the inaugural event, approached organisers about partnering with the race, it soon became clear that they had the same goals.

“At these types of events, they are always giving away mountain bikes as lucky draw prizes,” said race organiser Craig Wapnick. “I didn’t want a bike to go to someone who already had one and might not appreciate it.”

Together they conceptualised the junior development programme, which is envisaged as a long-term project.

“We need people and organisations that are prepared to do it properly and make it work,” said Wapnick.

Thus far they have appointed two individuals, Larry Paul of Reitz and Pierre Horn in Underberg, to establish and manage the first Kona clubs.

“The fact that we haven’t found other suitable candidates yet shows we mean business,” said Wapnick. “They must have patience in working with the kids and be serious about maintaining the bikes.”

Wapnick said each of the clubs would be given five bikes initially but that, once they had proved themselves, they could be given more. The plan is to hold twice-weekly after-school rides as well as development days on Saturdays.

The initiative is the latest development success for the race, which places community upliftment at the centre of its business model.

Local organisations are paid to run the eight overnight stops on the route and the money raised is used to fund schools, churches and charities in their area.
According to Wapnick, each race village made over R100 000 profit last year.

He said the feel-good factor was what kept organisers going when they felt tired.
“When you know you’re making a difference, you can’t stop.” 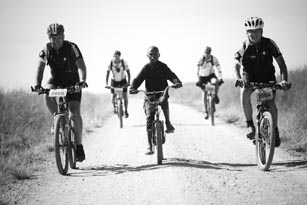 Organisers of the Fairbairn Capital/Old Mutual joBerg2c aim to grow a passion for mountain biking among the rural communities on its route. Photo: Kelvin Trautman | mediaandkelvin.com