Pre-race favourites David George and Kevin Evans edged ahead over the closing metres of a tight opening day to take the first leaders’ jerseys at the Subaru sani2c on Thursday.

The Nedbank 360Life duo completed the 87-kilometre stage between Underberg in the southern Drakensberg and Mackenzie Club near Ixopo in 2:49:16 to hold off MTN-DoItNow’s Max Knox and Adrien Niyonshuti by six seconds.

Three seconds further back were RE:CM’s Neil MacDonald and Waylon Woolcock – winners of the Fairbairn Capital/Old Mutual joBerg2c two weeks ago – who edged out Itec Connect’s Brandon Stewart and Darren Lill for the final podium spot.

George and Evans had the strongest kick on the uphill finishing straight and were able to take the early initiative in the three-day race, which is billed as the largest of its kind in the world. “We knew that when the racing has been as hard as today, the sprint is tough enough to make small gains,” said Evans.

The four-time winner said their intention was to make the race as hard as possible with a view on Friday’s queen stage through the Umkomaas Valley. “You might hurt yourself in the process, but you’re certainly going to hurt a few others as well.

“I had seven weeks of pent-up anger to release,” said Evans, referring to the broken collarbone he suffered in March. “I felt fresh today, but tomorrow we’ll find out if I have tour legs.”

The 32-year-old defending champion said he fancied their chances if he had to use stage one as a yardstick. “We were probably the most evenly matched team out there. It seemed each of the other teams had at least one rider struggling at any given time.”

Evans said they followed their usual sani2c modus operandi. “We went hard into the first single track, which leads onto the first climb. But everything came back together again by the first waterpoint.”

On the final climb – about 20 kilometres from the end – 360Life set a pace that only Stewart and Lill were able to match, but the frontrunners were hauled back once more. “The finishing drag became our focus after that.”

Team bizhub’s Catherine Williamson and replacement partner Candice Neethling lost ground in the closing stages to finish second in 3:21:01 with team-mates Yolandi du Toit and and Nicci Grobler third in 3:32:10.

“It was extremely hard,” said Taylor, who flew in from China on Tuesday. “I suffered all the way, but Karien kept me motivated.

“We noticed that Candice was starting to struggle at the end and knew we had it in the bag.”

The Contego pairing of Erik and Ariane Kleinhans stopped the clock on 3:06:01 for an easy win in the mixed section. 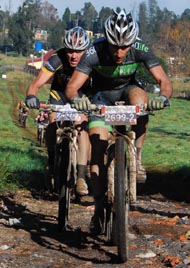 Kevin Evans of Nedbank 360Life, with Neil MacDonald of RE:CM on his wheel, powers towards the second waterpoint during the first stage of the Subaru sani2c on Thursday. Photo: Full Stop Communications