The Nelson Mandela Bay Splash Festival will serve up yet another slice of family-oriented fun at Hobie Beach in Port Elizabeth as it celebrates its 21st birthday this Easter weekend.

Festival director Glenn Van Eck said festivalgoers could look forward to an action-packed watersports and entertainment programme from April 22 to 25, as well as an expanded lifestyle village and a host of food and craft stalls.

“From the very beginning, the whole idea of Splash has been to extend the tourism season and give visitors and locals something to do over Easter.”

Friday’s highlights on the Magnetic Storm stage include the Watoto Children’s Choir from Uganda and the Bay FM Local is Lekker slot featuring the likes of Jakkie Louw and Gerhard Steyn.

The spectacular Algoa FM Fireworks are scheduled to go off at 8pm on the same day, with the station also doing live broadcasts daily.

The Bay FM Search for a DJ competition hits the decks on the first three evenings with Dr Victor and the Rasta Rebels closing out the programme on Monday at 2pm.

Children’s entertainment includes Bellino the magician, Puddles the clown and Stageworld’s theatre production of Peter Pan and the Pirates. Parents can shop for deli-style foods and high-end handcrafted goods in the lifestyle village.

The international watersports programme kicks off on Friday with world champion Dawid Mocke and PE’s Michéle Eray back to defend their titles in the 26km Surf Ski Classic.

The third round of the national jetski championships and regional inflatable boat racing will take place on Saturday and Sunday with the colourful King and Queen of the Bay events completing the watersports offering on Monday.

Van Eck said a strong focus on the beach and aquatic aspects helped entrench the metro’s position as Watersports Capital of Africa.

“We are constantly aiming to improve the entertainment while keeping families in mind,” said Van Eck. “Apart from securing national and international acts, it’s also important to promote the talent we have in the metro.”

He said the early festivals had been mainly entertainment focused. The nineties saw the introduction of watersports and the food village.

“By the time we celebrated our first decade, the festival had streamlined its three-pronged approach of entertainment, watersports and stalls,” said Van Eck.

Aside from a brief, controversial move to the harbour in 2008, Hobie Beach has remained the home of the Splash Festival, which draws hundreds of thousands of visitors annually.

CEO of Nelson Mandela Bay Tourism Mandlakazi Skefile said it was important for the metro to support annual tourism events like the Splash Festival because they offered economic multiplier effects as well as other intangible social benefits.

The festival’s social responsibility programme, for example, fed the local Community Chest with about R70 000 from the sale of stalls last year. 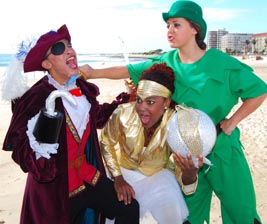