Adrien Niyonshuti from Rwanda, who is set to become his country’s first mountain biking Olympian at the 2012 London Olympic Games, will lead the African challenge at the Fairbairn Capital/Old Mutual joBerg2c from April 29.

The MTN-Qhubeka rider, who will partner Ghost-DoItNow’s Max Knox, has issued a stern warning to his fellow competitors in the nine-day, 900km event between Heidelberg in Gauteng and Scottburgh in KwaZulu-Natal. “Every race I enter I want to podium or win.”

A survivor of the 1994 genocide, in which he lost six brothers, Niyonshuti’s endurance has been forged under tough conditions.

“I love to ride my bike as it helps me to forget the past. I love pushing myself hard, even if it hurts, as it will never be as painful as the genocide.”

Niyonshuti – whose talent was first spotted at the Wooden Bike Classic in Rwanda five years ago – qualified for the Olympic Games when he placed fourth at the African Continental Championships in Stellenbosch in February.

“It was one of my greatest dreams. I’m so very excited to have this happen for me and my country.”

He and his Namibian team-mate Mannie Heymans were also the winners of the African jersey at the recent Absa Cape Epic.

“That jersey is really special to me because it represents being the best in Africa,” said Niyonshuti. The 24-year-old believes the Cape Epic has been perfect preparation for the Fairbairn Capital/Old Mutual joBerg2c.

“There will definitely be some strong riders in the field but in a race like this you are also competing against the terrain and weather every day. Luck plays a part as well.”

“It is so great to see new African riders competing at this level. When I was young, I did not even know that you could do this as a profession.”

He said if more young Africans were introduced to the sport and given similar opportunities, many more exciting riders would emerge from the continent.

“This is precisely the work of Kinjah’s Safari Simbaz organisation,” said race organiser Craig Wapnick, “which is why Fairbairn Capital is backing his team in a big way and sponsoring them to do the event.”

Wapnick said it was not merely about rewarding Kinjah and Kamau as top riders but about encouraging their efforts to develop talented youngsters from their community.

“They are serious professionals but they still have time to stop and assist their fellow competitors. These are the kind of people we want to ride our event.”

“As organisers, it is a pleasure to have them in our event as they epitomise the spirit of the race.” 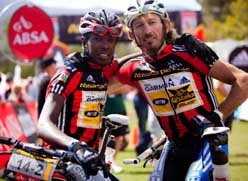