Team Bonitas’ Tyler Day notched up his first victory in a national classic when he took line honours in the 26th The Herald VW Cycle Tour in Port Elizabeth on Sunday morning.

Day, tipped by team captain Malcolm Lange as a dark horse before the race, outsprinted a breakaway group of 12 riders after 105km on an overcast and blustery day in the Friendly City.

The 21-year-old made the most of a lengthy lead-out by team-mate Johann Rabie to win the sprint easily from Team MTN-Qhubeka’s new national time-trial champion Daryl Impey and Tosal Solar-GT’s David Maree. His winning time was 2:34:05.

“Johann started the sprint 500m out, with Daryl on his wheel,” said Day. “I was sitting third wheel and kicked with 100m to go.

“The gutter was on the right but I went left so that no one could come over me. It was into a headwind and slightly uphill and required a power sprint.”

Day, who showed superb form throughout the race, was also involved in a two-man breakaway with RSAWeb’s Carl Pasio.

“He attacked from the leading group with just over 20km to go and I reacted immediately,” said Day. “I knew I was the fastest sprinter in the group and I didn’t want to gift anyone the win.”

The chasing pack of 10 hauled back the leaders just under 5km from the line and the race became a cat and mouse affair until DCM’s former U/23 national champion Clinton Barrow attacked, after which it became a free for all.

The roads were damp and much of the route was shrouded in mist after heavy overnight rain.

“The conditions were good for me. I enjoy rain and it was difficult to see the length of the climbs in the mist – which is good for the morale,” said Day.

He said the gutter winds also played in his favour. “I’m a big guy and we tend to deal with it better than the lighter riders.”

Impey, back in the country after spending a year on Lance Armstrong’s Team RadioShack, said it was a difficult day at the office for MTN-Qhubeka.

“We were outnumbered at the front – Brad (Potgieter) did a lot of work to bring the break back. We saved a bad day with a podium.”

MTN-Qhubeka’s Dennis van Niekerk, who made headlines last week when he placed fourth on the infamous Genting Highlands climb in the Tour de Langkawi in Malaysia, took the first King of the Mountain prime at Theescombe.

The second mountain prime, on Maitlands, was won by Kriek – who also won the second sprint prime at Altona. The first sprint, on Buffelsfontein Road, went to MTN-Qhubeka’s Reinardt Janse van Rensburg.

“We had quite a negative start,” said De Groot. “I think everyone was tired after yesterday.

“We went hard on the hills but Cherise and Marissa (Van der Merwe, the newly-crowned SA champion) covered all the moves.

“Our plan was actually to look after Ashleigh’s (Moolman Pasio) title. That did not quite work out, so we had to improvise.” 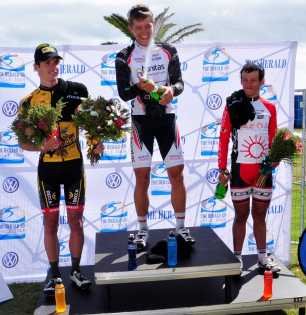