The Port Elizabeth beachfront is abuzz this week as riders descend on the city for a festival of cycling, which started with the South African championships on Wednesday and finishes with The Herald VW Cycle Tour national classic on Sunday.

Participants staying at the newly opened Town Lodge Port Elizabeth will be able to roll out of bed and into the heart of the action at Hobie Beach.

The 203-room hotel has come on board as the official accommodation sponsor of the cycle tour.

“We believe this is a great event to be associated with,” said hotel manager Glenn Pappin.

“We’re hoping that this is the start of a strong relationship with the race, which starts and finishes outside our front door.”

According to Pappin, the 52-hotel City Lodge group supported sports events because a large segment of its target market is involved in a variety of sporting disciplines.

“In PE, we have chosen to get involved with The Herald VW Cycle Tour. Our hotels are also very popular accommodation venues for the Comrades Marathon, Argus Pick n Pay Cycle Tour as well as rugby, cricket and soccer events.”

Pappin said earlier this week that a number of top cyclists had already checked in and expected occupancy rates to increase closer to the weekend.

As tour sponsor, he said, Town Lodge had allocated a number of rooms to the event organisers and would also be making three “refresher rooms” available at the City Lodge for the top professional riders.

“These are basically ‘day’ rooms, which will enable competitors to refresh themselves during the day – have a shower and change.”

Pappin said Town Lodge had also made provision for competitors’ bicycles to be stored in a secure area just off the lobby for ease of access.

Town Lodge, which opened in December last year, completes the City Lodge family of hotels – including the Courtyard, City Lodge and Road Lodge brands – on the beachfront.

“Being involved with The Herald VW Cycle Tour is an ideal way to draw attention to our brand new hotel, which has been a major vote of confidence in Port Elizabeth and its future by the City Lodge Hotels group,” said Pappin. 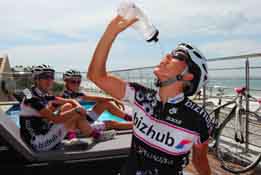