Neither spiders nor searing heat could deter Team DCM’s Brandon Stewart and Max Knox from making a one-two clean sweep at the 85km Extreme Challenge in Addo just outside Port Elizabeth on Saturday.

Knox gave Stewart the win (3:35:46) in The Herald VW Cycle Tour’s mountain bike challenge as the team-mates crossed the finish line together. Ben-Melt Swanepoel of Specialized/Mr Price completed the podium (3:41:17).

Stewart, 29, also won the sprint prime, while Knox, 24, powered his way to the King of the Mountains title.

It was Stewart’s turn to take the honours after Knox’s win in the 120km MTN Barberton ultra-marathon last week.

“We like to give each other good wins in different places,” said Stewart. “It’s good for the morale of the team and for us.”

According to Stewart, the race started quickly, with the peloton splitting early on.

“There was a lot of competition and the guys set a fast pace. Max attacked before the hot spot, forcing them to chase – it was always our plan for me to take the sprint.”

At the bottom of the Zuurberg pass, Knox attacked again to go clear of the leaders, which included Xterra world champion Conrad Stoltz (Specialized) and former German and U/23 world champion Manuel Fumic (Cannondale Factory Racing).

Knox asserted his dominance on the climb to take the prime with ease.

“That really put the pressure on the others,” said Stewart, who closed in on Knox on the technical horse trails high in the mountains of the Zuurberg Nature Reserve.

An ill-timed puncture put paid to Fumic’s challenge at that point.

But, said Stewart, unforeseen danger came on the descent when he finally caught up with Knox while crossing a treacherous riverbed.

“There were some pretty nasty spiders there and Max stopped at the bottom to clear them. I rode through a web and a spider landed on my face.”

In an attempt to brush it off, Stewart veered off the ridge and broke his shoe. “I rode like that for the last 40km.”

Stewart said he found the race even tougher than last year’s Mondi Herald Addo Mountain Bike Challenge, which took place in November on a similar course.

“It was really hot and, with strong contenders like Manuel and Conrad, we knew it would be a hard day.”

Luthi, 27, who won the 121km MTN Attakwas ultra near George in January, was also victorious in the Queen of the Mountains prime.

“It was really a challenge,” said Luthi, after losing a contact lens and crashing. “But you don’t think about the pain – you just race.” 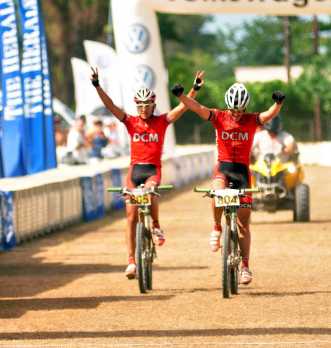