One of South Africa’s premier rock bands, Evolver One, will headline the rock festival at the Fifa Fan Fest™ in Port Elizabeth on Saturday, July 10.

Things are set to get loud at St George’s Park as fans gather for the penultimate game of the World Cup and even louder when a showcase of rock music gets the ball rolling. 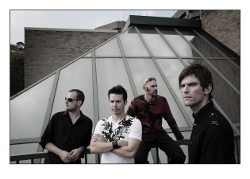 Starting at 1pm, various local acts like The Modes, Don’t Panic, 13th Floor, Grit and Universal Translators will rock out before Evolver One takes centre stage at 7pm.

“It’s an honour for us to perform at such a huge event. To headline in our hometown will be a memory that will live forever,” says keyboard player Sean Murphy.

The band Evolver, originally formed in PE in 2001, has completed 17 national tours and performed more than 500 shows at every major music festival in South Africa.

The band consists of Peter Pote on lead vocals and guitar, Murphy on keyboard and backing vocals, Tulsa Pittaway on drums and percussion and James Cohen on bass.

In line with their plans of taking their musical message to the world, the group recently underwent a name change to Evolver One.

“The name change, or should I say upgrade, has meaning for the four of us working together as one to make the world and South Africa a better place,” explains Murphy.

The World Cup presents a significant opportunity to carry out their mission, which they have dubbed Project Evolution.

“We believe in South Africa and try to spread optimism wherever we go,” declares Murphy. “We also give back where we can and therefore do every charity event possible.”

Evolver One’s new self-titled album, released this year, is the band’s third. Tracks like “Criminal” and “The World’s Gone Crazy” have been playlisted on radio stations across the country.

They also feature on the soundtrack to the movie The Race-ist.

The album signals the band’s maturation and willingness to tackle relevant social issues like HIV/Aids as part of their social responsibility campaign.

Evolver One’s raw-edged rock sound has seen them share the stage with international acts like Oasis, Snow Patrol, 3 Doors Down, Hoobastank and Evanescence.

These independent rockers’ previous albums Get Up (2006) and What’s The Story (2008) produced successful chart singles like “Let’s Get Naked” and “Why We Lonely”.

“We are a band full of energy and we bring it to stage every time we perform,” says Murphy. “We try to play all the well-known songs and introduce the new ones. Please forgive us if we don’t play your favourite.”

CAPTION: One of PE’s finest musical exports, Evolver One, will be the headline act at the Fifa Fan Fest™ rock festival on Saturday, July 10.