More than 12 000 fans braved the cold at the FIFA Fan Fest™ in Port Elizabeth on Youth Day to witness Bafana Bafana’s demise against a superior Uruguayan outfit.

Although it was not the result that the majority of the crowd had hoped for, the atmosphere at St George’s Park was electric throughout – despite the outgunned hosts slipping farther and farther behind.

“I did not expect such a huge turnout after all the rain we’ve had today,” said Putco Mafani, marketing and communications manager for the Nelson Mandela Bay Municipality’s 2010 World Cup organising team.

“This highlights the people’s love for Bafana Bafana. It’s a love that extends beyond age, race and gender.”

Mafani said he believed the Fan Fest in PE was the “most fantastic” in the country due to its huge screen. 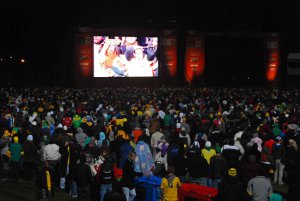 “I’m very happy to be part of this prestigious event. It’s just a pity that we’re hosting the World Cup in winter.”

Heavy rains throughout the day had left the field waterlogged and led to the cancellation of the first part of the entertainment programme, which had been designed to showcase the region’s youth.

However, by late afternoon the clouds lifted and the talented youngsters from the River Road Band and Afro Teens were able to warm up the ever-growing crowd.

Among them was Gascon Human, from Simon’s Town in Cape Town, who said the weather did not bother him and his wife, Jean, at all.

“We arrived this morning by car and wanted to be here at all costs. Who wants to watch the game by yourself when you can share in this fantastic atmosphere?”

Human said he was disappointed by the result, but even more so in the way Bafana played.

“The forwards and the backs were completely outmuscled. Our guys just weren’t physically up to it; we’re not as robust as they are.”

He was also annoyed at the way Bafana lost possession at crucial times; one bad pass leading to a goal.

The Humans will be spending three days in the Friendly City. “We’re here to watch Germany play Serbia on Friday, but first we want to get a sneak peek at the Germans training tomorrow.”

Well-known rapper, Linda “Pro” Mkhize, is the main act on Thursday’s entertainment bill. He will be on-stage at 7pm.

Local performers include Usiba Nocwadi at noon and the Wizard of Numb just before 6pm. The after party will feature DJ Shaam De Funk and Mphuzi.

The matches scheduled for live broadcast are: Argentina versus Korea at 1.30pm, Greece against Nigeria at 4pm and France and Mexico at 8.30pm.