The catchy lyrics of Locnville’s debut hit, “Sun in My Pocket”, accurately sum up the stellar success the electro dance duo is currently enjoying.

Born in New York and raised in Cape Town, identical twins Andrew and Brian Chaplin have been electrifying dance floors around the world with their hip-hop infused dance music.

“The American influence is the hip-hop side of things,” says Andrew of their trans-continental upbringing. “South Africa ¬– and specifically Cape Town – inspired a different way of thinking, as well as the more electro or electronica sound.” 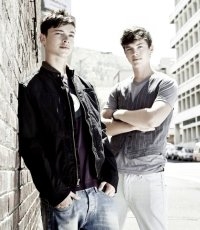 Many first-time listeners are surprised to learn that the deep-voiced African American sound belongs to two young white guys from Cape Town. “We’ve heard that many times before,” laughs Andrew, “but I think it’s a good thing because it definitely creates conversation.”

The Chaplin twins have been a talking point since their former band, III, released an album on Mxit. They became the first band in South African history to debut their album on the social messaging platform and it achieved double platinum download sales status.

However, it was only with the formation of Locnville that their musical vision began to take shape.

Locnville signed with leading South African independent label Just Music in November 2009 and released their first album, Sun in My Pocket, in February.

“It took about two weeks to record everything,” comments Brian. “We actually produced the entire album, so everything you hear from Locnville is 100% Locnville.”

Sun in My Pocket became the highest charting debut album by a local artist on the Musica charts. It also went to number one on the official South African charts.

After signing a global deal with Sony Music International in May this year, the meteoric rise of the Chaplin brothers shows no sign of slowing down.

“People can expect a lot from Locnville,” muses Andrew. “We're already working on a lot of new material for the new album. Also, we've got our European release going down in August so I'm really amped for that!”

They are also looking forward to returning to the Friendly City. Having played here before, they are unreservedly enthusiastic. “PE’s definitely got a party vibe about it! People can expect a banger of a show.”

Successfully entertaining the audience would appear to run in their genes – Andrew and Brian’s great-grandfather and Charlie Chaplin’s father were brothers.

Now the new-generation Chaplin brothers are also making it on the international stage and entertaining fans during the World Cup.

CAPTION: Locnville’s Andrew and Brian Chaplin are ready to lock and load on Tuesday at the Fifa Fan Fest™ in Port Elizabeth.