After nearly five years of traversing the country and performing in far-off places like the United States, Britain and the United Arab Emirates, The Dirty Skirts are coming to Port Elizabeth.

The four-man group from Cape Town will make their local debut at the FIFA Fan Fest™ at St George’s Park on Thursday – starting at 7pm. 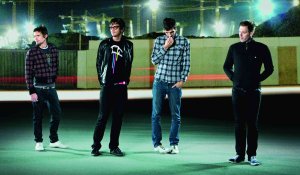 “It’s our first visit to PE and we’re really looking forward to it,” says Jeremy de Tolly, or Jess, as the group’s lead vocalist is also known.

“Fans have been asking us for years to play in the Bay. Now it’s happening at last.”

Although he says the public should not read too much into their name, it gives more than enough insight into their collective psyche and approach to their art.

“We simply chose it as it seemed funny at the time – and because we were keen to take a lot of risks when we started out,” explains De Tolly.

“We wanted to see what would happen when we make up an absurd name. We did quite a lot of stupid stuff. Some of it paid off.”

Having shared the spotlight with Freshlyground, Springbok Nude Girls, Oasis, Zola and other acclaimed artists, The Dirty Skirts (the “The” is often dropped in dispatches) are coming off two Fan Fest appearances in Cape Town.

Self-proclaimed Bafana Bafana supporters, the group can bank on a real Friendly City reception from fans that have been following their progress ever since they got together in 2004.

Their album Daddy Don’t Disco and the single “Rolling Like Thunder” further boosted their popularity after their early successes with On a Stellar Bender.

Dirty Skirts – with De Tolly and David Moffatt on guitar, Maurice Paliaga on bass and Mark de Menezes on drums – have played at Oppikoppi, Splashy Fen and Kirstenbosch. They also appeared at the National Arts Festival in Grahamstown as long ago as 2005.

Described as an “alt-indie” band, they have acquired a reputation for doing things their way, much to the delight of their fans.

Their ability to produce something different and to stay away from anything that looks like a beaten track, has also contributed to their success.

“Set me Alight” and “Homewrecker” were two of their early hits and Daddy Don’t Disco was nominated for Best Rock Album at the South African Music Awards in 2008.

Working their way to the top, they became popular on the club and festival circuits and they certainly won’t be strangers to many in the audience when they hit the city this week.

Entrance to the Fan Fest is free. Visit www.facebook.com/NMB2010 for regular updates.

CAPTION: The Dirty Skirts will make their Port Elizabeth debut at the FIFA Fan Fest™ on Thursday evening.