Hudson Park reclaimed the title in the East London Coastal tournament of the SPAR Eastern Cape Schoolgirls Hockey Challenge in a thrilling final against Clarendon in East London on Sunday.

Hosted by Stirling, the third edition of this competition produced another exciting day of hockey, with the matches taking place in fine weather and in an excellent spirit.

The Hudson Park outfit were the East London Coastal winners in 2016, but saw Clarendon claim the honours in last year’s competition. Clarendon went on to win the provincial title.

This time, however, Hudson had the edge in a final which tournament director Bev Forword said delivered a high-quality contest.

“In all, eight teams took part, with Cambridge, Stirling, Clarendon and Hudson reaching the semifinals,” she said.

“Clarendon beat Cambridge 2-0 and Hudson beat Stirling by the same margin to go through to the final.

“In a fine display of skills from both sides, the final developed into a fast-moving game from one end of the field to the other. Hudson eventually ran out winners 2-0.”

The Hudson team will now join other regional winners Kingswood (Port Elizabeth Inland) and Alexander Road (PE Coastal) in the provincial finals to be played at Woodridge, just outside PE, in August.

“It was another fun-filled, sunny SPAR Hockey Challenge made a little bit extra special with some Mothers’ Day hampers and surprises,” he said.

“There was a really wonderful turnout from families and support groups.”

He added that just as SPAR sprang plenty of shopping surprises on their customers, so did the teams at the Schoolgirls Hockey Challenge throw up surprises of their own.
“While Clarendon seemed very organised and well set to control events in the preliminary rounds, the Hudson Park team always looked like an outfit who could upset the applecart,” he said.

“And they did just that, seeming to want that victory just a little bit more.

“The spirit and commitment of the Hudson Park team epitomised everything that this Hockey Challenge stands for.”

Stapleton added that it was good to have a variety of schools competing, with the remaining teams being Grens, Merrifield, West Bank and Greenpoint.

“It was so encouraging to see these teams out there, giving everything they have and just loving the spirit of the event.

“I am sure they made special memories and, hopefully, sporting friends for life.”

The remaining regional tournaments will be played in King William’s Town on Sunday (May 20) and George the following weekend. 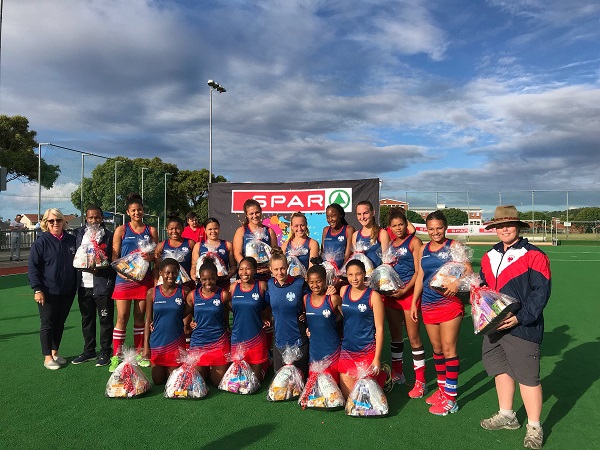 Hudson Park won the East London Coastal tournament in the SPAR Eastern Cape Schoolgirls Hockey Challenge for the second time when they beat Clarendon 2-0 in the final at Stirling in East London on Sunday. Picture: Craig Giese