King William’s Town school Kingsridge added their name to the list of Eastern Cape finalists after winning the East London Inland section of the SPAR Schoolgirls Hockey Challenge in Queenstown on Sunday.

With eight teams from as far as Burgersdorp and Aliwal North taking part, the players relished the opportunity to show their skills in a tournament that has caught the imagination of hockey fans in the region.

Collegiate, DSG and Hudson Park have already qualified for the regional finals following three exciting tournaments in PE, Grahamstown and East London in April and May.

The winner of the fifth event in George this Saturday will become the last finalist for the regional finals at Woodridge just outside Port Elizabeth on August 13.

In Sunday’s final, Burgersdorp showed great determination to keep the fast-running Kingsridge at bay for three-quarters of the game.

However, the pressure exerted by the King girls eventually told and they ran in three quick goals before the end to secure their berth in the finals.

Girls High School Queenstown (GHS) topped pool one ahead of Aliwal North, while Kingsridge and Burgersdorp were the top two in pool two.

In the cross-pool playoffs Burgersdorp kept GHS at bay with some outstanding goalkeeping, sending the match into a penalty shootout. In a tense finish, the Burgersdorp girls held their nerve to edge into the final.

The second semi saw Kingsridge beat Aliwal North 2-0 to claim the remaining spot in the final.

Ernst du Plessis from Stutterheim was named the most promising umpire.

Tournament director Bev Forword said the tournament had been another great success following the previous weekend’s in East London.

“It was wonderful to see so many schools taking part. The perfect weather provided for a wonderful day of hockey and fun for all.”

The tournament is the brainchild of SA women’s hockey team manager Les Galloway, who initiated the concept among KwaZulu-Natal schools six years ago.

She introduced the concept to the Western Cape last year and the Eastern Cape this year. 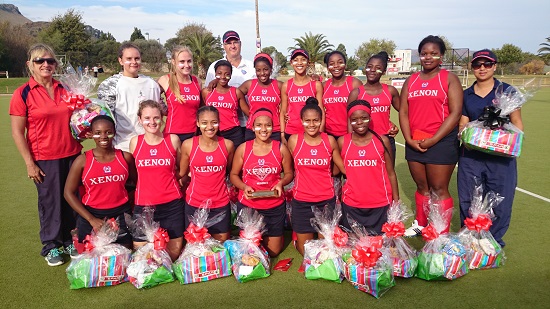 Kingsridge from King William’s Town added their name to the list of Eastern Cape finalists in the SPAR Schoolgirls Hockey Challenge. Photo: Supplied