“I think it’s absolutely critical, given we have so little quality stage racing. It’s fast becoming the most prolific stage race in the country,” said the former three-time Giro del Capo winner.

“Overseas teams will enjoy the timing of the event, the benefit of current foreign exchange and the beautiful racing surrounds, and they’ll provide the much needed international flavour.”

Last year Peter Koning, riding for Australia’s Team Drapac, rode away with the spoils after the race was dominated by Team Dimension Data’s (known as MTN-Qhubeka then) feeder team in 2013 and 2014.

Mclean supported the fact that the 522km tour, which is presented by Rudy Project, culminated with a mountain top finish.

“It is bound to be captivating and dramatic. The final result is likely to be up in the air until the last few kilometres.

“Being a good climber with a strong team behind you will be critical to success.”

He said mountain top finishes – this year’s tour features two – allowed the drama and suspense to unfold for riders and spectators alike.

Before the grand finale to the Taal Monument, riders with an eye on the general classification will have to conquer a testing 144km course to the top of Du Toit’s Kloof Pass on stage three.

Mclean said the Tour of Good Hope, which is sanctioned by Cycling SA, could grow into a fully-fledged international tour and saw no reason why it couldn’t draw more top international teams.

“It has the potential to become a fantastic event and attract top teams from around the world, not unlike what we’re seeing at the Tour Down Under in Australia at the moment.”

With the host town of Paarl acting as a natural gateway to some of the country’s most famous passes, the new cloverleaf racing format lent itself to some spectacular stages,” said race organiser Wynand de Villiers.

Although the tour aims to attract the best possible international field, the organisers have widened the net and opened it to other categories like amateurs and vets, who start separately.

“Our aim in introducing these categories is to make the amateurs feel like pros,” said De Villiers. “There are many amateurs capable of riding in tours but, until this event, haven’t been able to do so.”

De Villiers said they already had 800 confirmed entries, of which 250 were international.

“The field is limited to 1 000 riders and we won’t accept any entries after the January 30 deadline.” 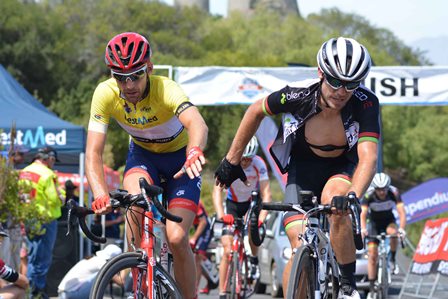