Gauteng cyclists have until March 30 to get their entries in for the eighth edition of the Emperors Palace Classic, which takes place from Kempton Park on April 11 and 12.

Billed as “the race of dreams”, the event’s offering has been expanded in recent years to include both road riders and mountain bikers.

Racing starts with the 20km and 40km off-road races on the Saturday, followed by the 50km and 102km road races the following day.

The Circuit Spectacular will once again bring the curtain down on the weekend’s racing programme.

This invitation-only, 30-minute criterium race sees South Africa’s top pro riders face off in a high-speed battle on a circuit near the main entrance to the casino resort.

“It’s a real crowd-pleaser, so we’ve moved the Circuit Spectacular and the kids’ races to a more visible and accessible spot to allow more spectators to get in on the action.”

De Villiers said as far as the average rider was concerned, the line-up offered the perfect autumn challenge for riders of all fitness levels and technical abilities.

“The event is nicely nestled at a time of year when temperatures are becoming milder and the chances of rain are slim.”

He said the road routes offered fast and flat circuits with good surfaces throughout.

“From a safety perspective, we’ll be focusing on creating a lot more awareness and visibility.

“We will be erecting signage along the route to alert motorists of the event ahead of race day.”

On the day, more than 200 marshals and 150 traffic officers would be on duty, he said.

Sweat & Gears’ Lee Stockenstrom, who designed the mountain bike courses, said riders would once again get to experience the excitement of riding in the shadow of the aircraft on the grounds of OR Tambo International Airport.

“It’s urban mountain biking at its best. It’s so close for East Rand cyclists; it’s practically in their backyard.”

Stockenstrom, who has been responsible for the mountain bike routes since the discipline was added four years ago, said the course would remain largely unchanged.

“It’s very user-friendly and slightly undulating, with some tar work thrown in as well.”

He said there was just one technical drop-off on the 22km track where riders had the option to either walk down or use the chicken run on the side.

“The track is essentially made up of three sections. The first bit is through a forest, then round the dam and suburbs, and finally a seven-kilometre flat section right next to the runway – all interlinked by pavement rides.

“The tree section is my best. Six kilometres of winding forest, more than enough room to overtake and slightly downhill – so it’s nice and fast!”

Stockenstrom said the trails would be open every Wednesday evening for training rides and also on weekends.

De Villiers added that the nearby casino resort offered convenient and safe parking as well as a variety of family entertainment options once the racing was done.

“Emperors Palace put in a massive amount of effort to ensure a hassle-free experience for riders at the venue, which is perfectly suited to hosting the more than 8 000 expected participants over the weekend.”

Enter at www.cycleevents.co.za. Late entries will be accepted at registration but not on the morning of the race. 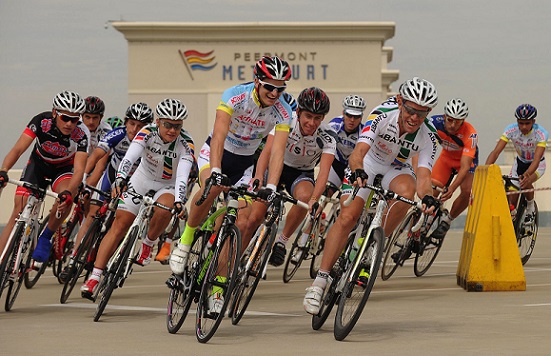