The University of Johannesburg is set to fend off the approaching winter cold with hot hockey action when they host the semi-finals and finals of the Varsity Cup men’s hockey competition next weekend.

The competition showcases the best of university hockey with only the top teams participating over three weekends in May.

Going into the penultimate weekend in Bloemfontein tomorrow, UJ head the log followed by UFS and NMMU.

“The standard of competition in this year’s tournament is very high,” said Faherty. “UJ have gone into it as one of the favourites after winning the Ussa champs last year.

“They have been training rigorously with their coach (Gareth Ewing) and we are excited to see the result.”

UJ hockey manager Elize le Roux said it was a great honour for the university to host the elimination rounds of such a prestigious competition.

“It not only showcases us as a tertiary institution and our facilities, but also the most talented young players in the country.”

She said the host university had produced several top-class players over the years, including current national players Clinton and Brandon Panther and Taylor Dart.

Although some of the matches will be televised on SuperSport, Le Roux encouraged fans to make their way to the UJ AstroTurf in Radnor Street, Melville, from May 17 to 19.

“It’s much better to experience the vibe and to see the action unfold in front of you than to watch it on television,” said Faherty.

“Johannesburg is rapidly running out of summer so come join us for the last of the sun and some coffee to keep the chill away.

“We will also have some great sound with tunes that will keep your feet tapping throughout.”

Tickets cost R20 at the gate, but free tickets can be obtained by registering on www.varsitysportsa.com.

Refreshments will be on sale, including a Mugg & Bean stall with coffee and muffins. 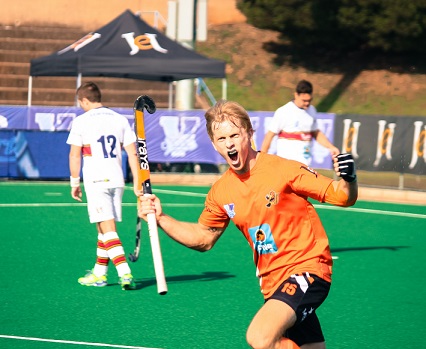 The University of Johannesburg’s national hockey star Clinton Panther will be one of the top young players in action when UJ hosts the knock-out rounds of the Varsity Hockey competition in Melville from May 17 to 19. Photo: Christilee Jansen