British national road champion Sharon Laws proved to be a law unto herself when she soloed to victory in her debut performance at the Momentum 94.7 Cycle Challenge in November.

Laws broke away with 50km to go in her maiden outing for Momentum-Toyota to announce her arrival on the South African racing scene in dramatic fashion.

The former Olympian says her team went into the race with no assigned leader but with a plan to make the race hard and reduce the bunch to a small group in which they would have the numerical advantage.

“After the Mandela Bridge, the bunch decreased in size a little and on the Witkoppen climb the team kept the pace high.

“I accelerated, hoping to force a select group, but when I looked behind I realised no one was following. So I continued to keep the pace up and had quite a gap by the top.”

The climber, who was also her country’s time-trial champion in 2008, says she pressed on, knowing that it would force the other teams to chase and allow her team-mates to sit on and wait.

“Once the gap got to two minutes, I knew I just had to keep my head down and the pace consistent and I would have a good chance of getting to the finish alone.”

She crossed the line in 2:39:34, nearly five minutes ahead of fellow Brit Catherine Williamson (bizhub-FCF) and new team-mate Cherise Stander.

MTN-Qhubeka’s Reinardt Janse van Rensburg took an emotional win in the men’s race (2:10:19) in memory of his father. It wrapped up an incredible season for the youngster, who started with a win in the Pick n Pay Cape Argus and went on to secure 14 international victories.

Laws, who rode for soon-to-be-defunct AA Drink-Leontien.nl this season, says winning her new sponsor’s race was a dream start to the next chapter of her cycling career.

“When you move to a new team you always want to prove that you are worth the investment. I really wanted to have a good performance and trained hard in bad weather in Spain before I arrived, so it was great to see it all pay off.”

Her victory in the world’s second largest road race caps a remarkable season, which included second place overall in the Gooik-Geraardsbergen-Gooik race in Belgium, a podium finish in the Gracia-Orlova stage race in the Czech Republic and a bronze medal in the team time-trial at the world championships in Holland.

Despite having what she describes as her best season to date, the Beijing Olympian was somewhat controversially omitted from this year’s team for the London games.

“It’s something that I worked towards for many years, so ‘disappointment’ doesn’t quite express the feeling sufficiently.

“I was the fourth-ranked British rider in terms of UCI points and my points helped to qualify the fourth slot for Great Britain in the road race.

“I think enough people had told me that the selectors would have to take me for me to start believing it, so it was a huge blow.”

The environmental project manager’s “unexpected cycling career” has taken some interesting turns since she first borrowed a friend’s bicycle for an adventure-racing weekend in 2002.

Instantly hooked, Law moved to South Africa later that year for work and started competing in mountain bike events “just for fun”. By the time she returned to the UK in 2004, she had an Absa Cape Epic title to her name (alongside partner Hanlie Booyens).

“I moved to Melbourne (Australia) at the end of 2006 and discovered an avid road riding scene. I was travelling worldwide at the time so had little opportunity to race but in December 2007 I won a stage race with a mountain-top finish.”

Her success prompted her to invest in a decent bike and coach, which helped her finish second in the Australian national champs in 2008 and grab a spot on the British road team. “After a successful Tour de l’Aude in France, I made the Beijing squad.”

In 2009, Laws and Booyens claimed a second Epic win and have kept their promise to once again challenge for the title in the 10th edition in 2013.

“Hanlie and I are realistic about our chances and know that we will be up against very tough opposition given that it is now a UCI race. She works full-time and my priority is road racing, but I still believe we will be competitive.”

Having lived and worked all around the world, including South America, Europe and Australia, the Kenyan-born rider is happy to be back on African soil for now.

Laws says she will divide her time between Stellenbosch and Girona, Spain, which is her home base for her European racing commitments with Lotto-Belisol.

The 38-year-old is looking forward to mentoring younger riders like Ashleigh Moolman-Pasio on the international stage-racing scene.

“From a personal point of view, I’d like to consolidate on my performances this year with more podium places in UCI races. A major win would be nice before I finish my career – whenever that might be!” 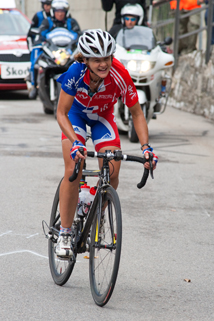 Sharon Laws in action at the 2009 UCI Road World Championships in Mendrisio, Switzerland.