SPAR Eastern Cape ended the fifth A-Bay Wheelchair Wednesday in May on a positive note with a donation of 10 wheelchairs to the Association for the Physically Disabled in Nelson Mandela Bay.

Paul, who was born without pectoral muscles on the left side of his body and is not severely disabled, has already qualified for four swimming events and looks set to be a major medal contender when the team is announced next month. He is currently ranked number one in the world in the 100m breaststroke.

“I’m involved with people in wheelchairs quite a lot. But to have to sit in one for four hours and actually feel what it’s like is a really humbling experience.

“You don’t actually understand until you’re in those people’s position.”

Paul said he and his helper, swimming coach Brian Elliot, had experienced difficulties with simple activities able-bodied people took for granted – such as finding a table at a coffee shop and using an ATM.

“Everything takes a lot longer. There’s not just strain on the person with the disability, but also on the entire family. I think we learnt that today (Wednesday).

“It gets easier with help, but it’s not an easy situation to be in.”

According to APD fundraiser Willie Bosch, the aim of the initiative was to raise awareness among business leaders about the challenges that people with disabilities face and set about finding constructive ways to address them.

“If I had to rate PE in terms of being disabled-friendly, I’d say we’re fair, not good, but we’re getting there.”

SPAR Eastern Cape marketing director Martin Webber said some 66 000 people in the city were classified as disabled. “On the whole, the majority of our stores are friendly towards people with a disability but we can always improve.

“We’d like to be seen as the retailer that takes it to that new level and provide a better experience for them.”

The retailer’s contribution rounds up to 50 the number of wheelchairs that will be donated to children with disabilities in the metro.

The wheelchairs will be presented at a handover ceremony at the Red Location Museum in New Brighton on June 6.

In addition, the proceeds from Wednesday’s event will go to the APD Day Care Centre in Motherwell, which looks after 29 children with disabilities.

Zonke SUPERSPAR owner Kevin Klette, who took part on the day, said he was pleased that the money raised would assist his community directly.

“The funds go towards helping people that are right around the corner from us and are customers of ours. They support us, so I’m glad we can help them.”

Klette said the initiative had been a real eye-opener. “We have five wheelchair-friendly trolleys but only now do we know how to work them properly. I see they actually strap on to the chair.”

He said the store’s merchandising staff had responded well and were now more aware of the needs of customers in wheelchairs, such as offering assistance in getting products off the top shelves.

“Personally, I found it extremely frustrating. I couldn’t go to and from the receiving department without assistance because the ramp is so steep.

“The guys also had to carry me upstairs to my office and, once there, I couldn’t do simple things like switch on my PC or charge my cellphone – I couldn’t reach them.”

Although the four hours felt really long, Klette said it had given him a new perspective. “We’ve never actually spent too much time thinking about what it’s like for a person in a wheelchair.

“It’s a great way to get involved. It’s far more than simply signing a cheque or giving away a prize.” 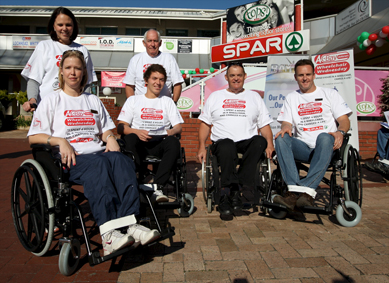