The Eastern Cape once again proved itself a powerhouse in the junior men’s ranks with four Port Elizabeth riders included in the seven-man South African track team.

The national squad was officially announced by Cycling South Africa (CSA) on Tuesday following a two-week training camp in Durban earlier this month.

With Shane Pheiffer and Cuen Holland completing the local quartet, Walmer and 2nd Breath cycling clubs feature one member each.

All of these riders are set to make their debut for the national team at the UCI Junior Track World Championships in Moscow in August.

According to CSA’s director of transformation and development Roger Bouton, the four were among 17 riders invited to attend the training camp, which finished last week.

He said the camp formed part of the organisation’s long-term vision for identifying talent ahead of the 2016 Olympic Games in Rio de Janeiro.

In the short term, said Eastern Cape Cycling track commissioner Johan Nell, the boot camp gave selectors the opportunity to monitor the riders’ performances and qualifying times ahead of the worlds.

Nell said the standard of cycling in the province was currently “very high” and the riders’ selection was a continuation of its strong track tradition. “We probably have the strongest junior contingent on the national circuit at the moment.”

He will be joined in the team sprint by Pheiffer and Holland, with the latter also competing in the individual sprint.

The other members of the team are Daniel Stroebel (Free State), Jac-Johan Steyn (Gauteng) and Nathan Cornelissen (Western Cape). Dirkie Nel (Gauteng) is the reserve.

In another coup for the Eastern Cape, PE’s Tannah Robinson (Walmer) was selected as the country’s only junior ladies’ representative. 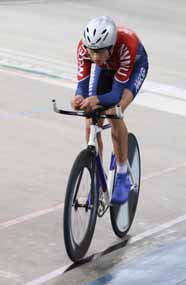 NMMU-Mecer track cyclist Marinus Prinsloo is one of four Eastern Cape representatives included in the South African junior men’s team that will compete in the UCI Junior Track World Championships in Moscow in August.