Reigning world series champion Dawid Mocke has confirmed he will be bidding for a hat trick of wins at the Nelson Mandela Bay Surf Ski Classic at Hobie Beach in Port Elizabeth on Friday.

The 26-kilometre race launches an action-packed four-day watersports programme at the Nelson Mandela Bay Splash Festival over the Easter weekend.

“It’s always great to come down to PE for this race,” said Mocke. “Where it lies in the season – right at the end of base training – makes it a good indicator of fitness levels.”

The South African single ski champion will lead a strong field featuring the likes of his younger brother Jasper and local favourite Richard von Wildemann. With other top paddlers like Matthew Bouman, Tom Schilperoort, Sean Rice and Hank McGregor as yet unconfirmed, Mocke is not resting on his laurels.

“All of them pose a threat – especially if the racing’s flat.” The Fish Hoek resident and all-round paddler said he was used to choppy conditions, which could favour him on the day.

Mocke said the event was a great racing distance. “It’s right on the edge of your endurance – most guys can easily do 20 kilometres, but it’s the last six that count in terms of mental and physical toughness.”

He said his race tactics would be to go hard from the start, depending on the conditions.

“Things normally start hotting up from the turn at the boiler near the Cape Recife lighthouse. When you turn downwind with the swell, you can really open the gap.”

The two-time defending champion said the finishing stretch between King’s and Hobie beaches was also “tougher than you’d expect”.

Mocke is currently in good form following his victory in the two-stage Défis Kayak race in the Caribbean in March.

His wife and Beijing Olympian, Nikki, who was set to be a strong contender in the women’s race, is recovering from a broken foot sustained during a lifesaving training session nine weeks ago.

“She’s just going to do it for a hoot and will be happy to finish without too much suffering,” he said.

This news clears the field for PE-based defending champion and fellow Olympian Michéle Eray, who will also be back to defend her title.

In January, she powered to victory in the Perth Doctor Surf Ski World Cup in Australia – the opening event of the world series.

Mocke placed third in the men’s race and is aiming to strengthen his overall position at the upcoming Euro Challenge in Alicante, Spain.

Both Mocke and Eray will compete in the Pennypinchers Easter Surf Ski Challenge in Plettenberg Bay on Saturday. 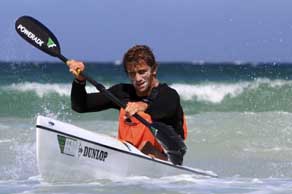